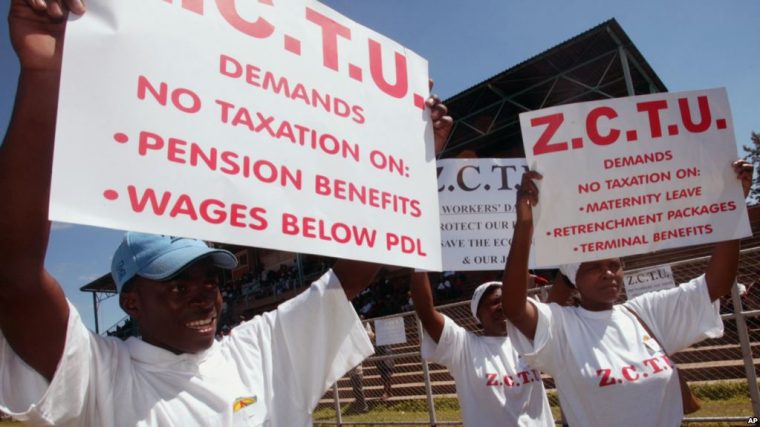 The country’s biggest labour union, the Zimbabwe Congress of Trade Unions (ZCTU) says salaries should be increased by at least 50 percent to mitigate against the rising cost of living.

Prices have risen in the southern African country by up to 300 percent due to the exchange disparity between the physical United States dollar, RTGS/mobile dollar and the surrogate bond note currency.

With most of Zimbabwe’s manufacturing industries having fallen silent as the economy struggled since the turn of the millenium, most products are imported.

But hard currency attracts a premium of up to 90 percent on the black market, resulting in higher prices.

Analysts say retailers also hiked prices in November, particularly when the military toppled longtime leader, Robert Mugabe in a bloodless coup and the country’s economic direction was not clear.

Data from the national statistics agency, Zimstat, puts the country’s inflation at 2.94 percent in November.

“We unreservedly condemn the enormous margins of the recent increases in prices that has seriously eroded the incomes of ordinary workers who are finding it hard to survive on their meager wages,” said ZCTU secretary general Japhet Moyo in a statement.

“We demand a 50 percent upward review of wages and salaries across the board to compensate for the increases in basic commodities.”

Moyo implored government to stop offering piecemeal solutions that will cost the country greatly in the long run.

“The government must come up with meaningful solutions to the crisis we are facing. Stop-gap measures have been employed before, yet people continued to suffer.”

According to the Consumer Council of Zimbabwe, low-income urban earner monthly basket for a family of six increased from the end-October figure of $593.55 to $598.16 by end of November, which shows a 0.72 percent increase.