Where will Mnangagwa get money to buy cars for chiefs? 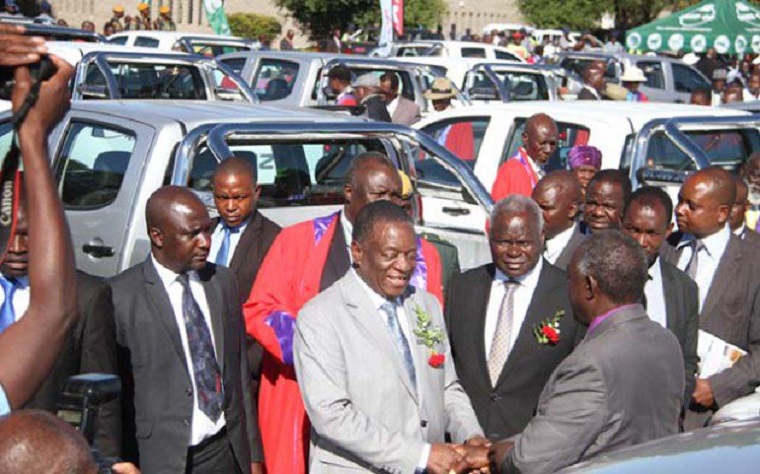 The government has allocated only $2 million for the acquisition of vehicles for chiefs when the bid was for $9 million raising questions as to where President Emmerson Mnangagwa will get the money to buy vehicles for more than 200 chiefs before elections.

Mnangagwa distributed the first 52 vehicles to the chiefs last year and promised to buy more vehicles for the remainder of the country‘s 280 chiefs before the elections.

The decision has been condemned by the opposition as vote buying.

The Parliamentary Portfolio Committee on Local Government, Rural and Urban Development said it had noted the inadequacy of the funding for the chiefs’ vehicles and also expressed concern about the ministry’ role over the role and functioning of traditional chiefs as the Constitution stipulated that separate revenue and expenditure must be given to the Council of Cjhiefs to carry its mandate independently.

The committee also said for the fifth year running the government had failed to allocate 5 percent to provinces and local authorities as required by the Constutition.

HON. MADANHA: Thank you Mr. Speaker Sir. I rise to present a report of the Portfolio Committee on Local Government, Rural and Urban Development on the Ministry of Local Government, Public Works and National Housing. Mr. Speaker Sir, the Ministry’s function priorities are in the area of policy and administration, partial planning, local governance, construction, maintenance and management, national housing delivery and disaster risk management. I want to start by thanking the Hon. Minister of Finance for having increased this year’s budget as compared to 2017 budget which was US$95.9 million. This year’s budget is US$132 781 000.

As a Committee, we are certain that the Ministry will meet its requirements and certainly improve on service delivery. Our observations as a Committee are as follows: –

· The Committee also observed that there is still centralization of power within the Ministry which is against the requirements of chapter 14 of the Constitution which calls for devolution of power to local authority and provincial councils.