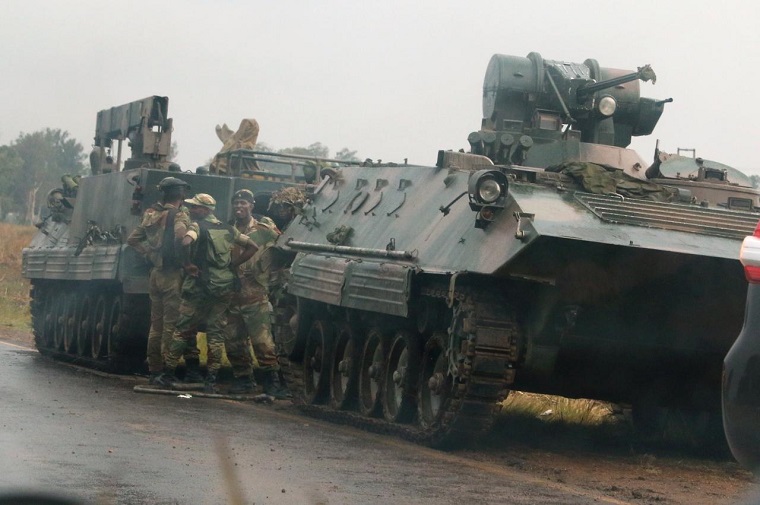 The Zimbabwe Defence Forces in a statement issued through the national broadcaster this morning said it had not taken over the government but had merely stepped in to restore order. But it warned that any provocation would be met with the appropriate response.

It also cancelled leave for all members of the defence forces and called upon all of them to return to their barracks with immediate effect.

“We wish to assure the nation that His Excellency, The President, of the Republic of Zimbabwe, Head of State and Government and Commander in Chief of the Zimbabwe Defence Forces, Cde R.G Mugabe and his family are safe and sound and their security is guaranteed,” the ZDF said.

“We are only targeting criminals around him who are committing crimes that are causing social and economic suffering in the country in order to bring them to justice.

“However, we encourage those who are employed and those with essential business in the city to continue their normal activities as usual.

“Our wish is that you enjoy your rights and freedoms and that we return our country to a dispensation that allows for investment, development and prosperity that we all fought for and for which many of our citizens paid the supreme sacrifice.”

The statement went on: “We wish to make it abundantly clear that this is not a military takeover of government. What the Zimbabwe Defence Forces is doing is to pacify a degenerating political, social and economic situation in our country which if not addressed may result in violent conflict.

“We call upon all the war veterans to play a positive role in ensuring peace, stability and unity in the country.”