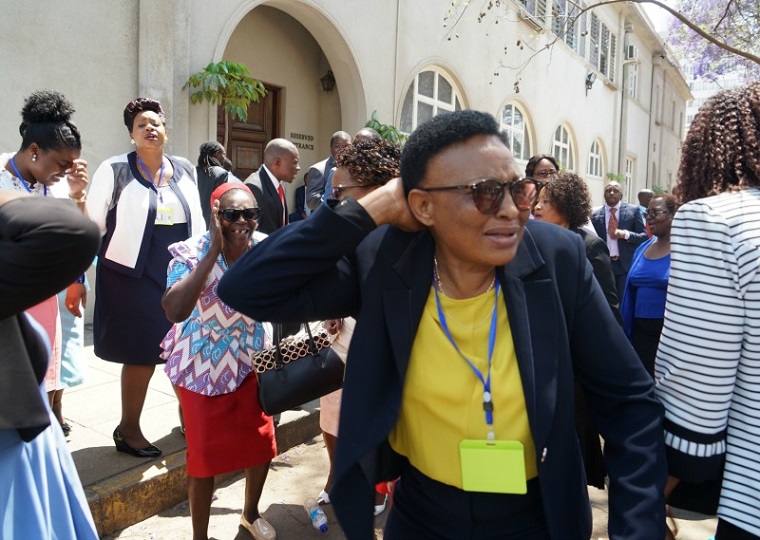 Three Movement for Democratic Change legislators have sued government demanding US$27 000 as compensation for violation of their fundamental rights when some law enforcement agents assaulted them in Parliament in November last year.

The three, Lynette Karenyi, Thabitha Khumalo and Amos Chibaya were manhandled and assaulted by Zimbabwe Republic Police officers who invaded Parliament in November 2018 to eject them following an instruction by Speaker of Parliament Advocate Jacob Mudenda after they refused to rise to attention when President Emmerson Mnangagwa entered Parliament to attend the 2019 national budget presentation.

The legislators were protesting against the ZANU-PF leader’s claim to victory in the July 2018 elections.

They also allege that they had their clothes torn during the scuffle.

Shoko charged that the assault of the legislators amounted to violations of their constitutional rights to be treated “humanely, with respect, with dignity, with integrity” and not to be subjected to physical, psychological torture or to cruel, inhuman or degrading treatment or punishment, as guaranteed in sections 50, 51, 52 and 53 of the Constitution.

Karenyi, who fell down as she was forcefully grabbed by three police officers and suffered injuries to her right arm, is demanding US$9 000 for damages emanating from shock, pain, suffering and past and future medical expenses.

Chibaya is demanding compensation for payment of US$9 000 for damages for pain, suffering and medical bills he incurred for treatment, while Hon Khumalo, who is asthmatic and lost her breath during the Parliament fracas and sustained some bruises on her hand and right hip, is demanding payment of US$9 000 for shock, pain and suffering and for past and future medical expenses.-IOL