Matemadanda says no one can stop him from attending Mugabe’s... 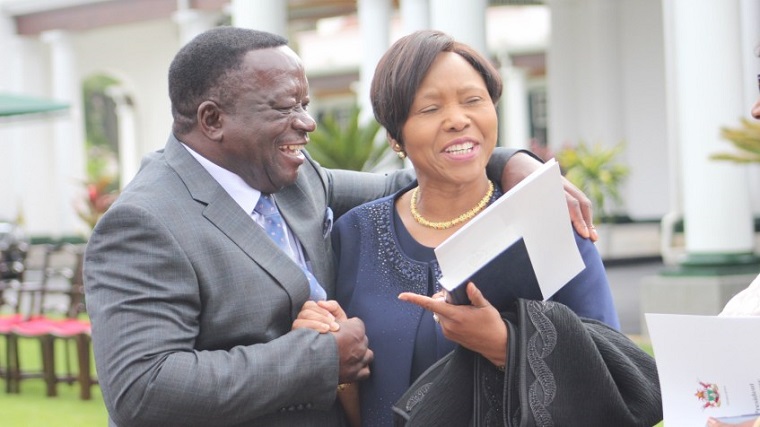 Zimbabwe war veterans leader Victor Matemadanda who is also the Zimbabwe African National Union-Patriotic Front national commissar says no one can stop him from attending former President Robert Mugabe’s funeral set for this weekend, but he is not going to fight over a dead man.

Matemadanda was responding to reports that Mugabe’s family had said he and his boss Defence Minister Oppah Muchinguri-Kashiri will not be allowed to attend Mugabe’s funeral.

Mugabe died in Singapore on Friday.

The former President was declared a national hero but It is still not clear where he will be buried as the family is reportedly insisting he should be buried at his rural home at Kutama while the government would want him buried at the national Heroes’ Acre where his first wife Sally and his sister Sabina, and other national heroes including Father Zimbabwe Joshua Nkomo, are buried.

Matemadanda and Muchinguri-Kashiri are said to have said “awful things” about Mugabe while he was still alive.

Matemadanda and some of his colleagues in the war veterans association clashed heads with Mugabe when they accused him of betraying the struggle accusing him of being misled by his second wife Grace.

They protested against the use of party slogans that were promoting Grace saying party slogans were only reserved for Mugabe and no one else.

Matemadanda told church leaders in Bulawayo at the weekend that reports that he should not attend Mugabe’s burial were not a big issue but no one had the right to stop him from attending.

“For as long as the family has agreed that Cde Mugabe is a national hero, they can’t stop me because Government protocol allows me to attend the funeral. They don’t know what they’re talking about,” he was quoted by the Bulawayo daily, The Chronicle, as saying.

“I will not join a fight over a dead man. Where I come from we don’t brag over the dead but we mourn them…….

“I don’t know what the elders in Cde Mugabe’s community in Zvimba say about this. But this person whose funeral they’re refusing to let me attend forgave the people who jailed and tortured him during the liberation struggle…..

“For those who may not know, when I started resisting what our leader was doing, I did not just do it. We actually spoke about it. Unfortunately he’s gone and he’s not here to testify.

“I booked an appointment with him and I told him that I was not in agreement with some of the things he was doing. We spoke at length,” Matemadanda said.

“I worked under Cde Mugabe for a long time and people who are saying I should not attend his funeral don’t know when I started working with him. Although I was low in the party, I worked with Cde Mugabe at critical stages of the revolution where they didn’t come themselves to defend their own. We could not by principle allow him free rein when we knew that we had not agreed on some of the things that were now happening in the party…

“Even when we disagreed on some issues, we never doubted his capacity, leadership qualities and his contribution to the liberation struggle and the development of the country. But when the truth has to be said, we should not bury our heads in the sand.”