Boost for Matebeleland South as Zimbabwe gets $20million irrigation loan... 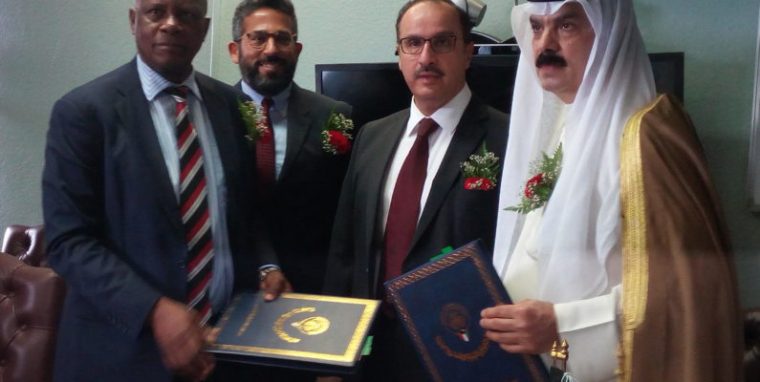 Kuwait today signed a $20 million loan agreement with Zimbabwe to finance the development of irrigation infrastructure at Zhove Dam in Matabeleland South.

The loan has an interest rate of 1.5 percent per annum with a 25 year tenure which includes a 5 year grace period.

The irrigation project is expected to cover about 2 500 hectares of land, which will be put under citrus production for export to Kuwait.

It will benefit more than 5 000 households upon completion and the targeted areas are Ferguson, Bishopstone and Cawood Ranches and Matengwe, Mabidi and Malala Communal Lands.

Matabeleland in the southern part of the country is a predominantly dry region, receiving very low rainfall.

“The current season turns out to be much better owing to above normal rains that we have received and records show that Zhove is 100 percent full. However, lack of investment in irrigation investment mean the country will not fully utilize this water for some time,” said Finance Minister Patrick Chinamasa.

“This agreement will go a long way in unlocking the potential of Zhove Dam and the surrounding area.”

The total cost of the project is estimated at $35.7 million and the government will contribute $7 million, leaving a financing gap of $8.7 million.

Chinamasa said Kuwaiti officials had approached the Abu Dhabi Fund for Development to finance the balance.

The Kuwait Fund has, since 1980, advanced loans and grants to Zimbabwe amounting to $60 million, targeted at projects in agriculture, road and rail transport but stopped lending to the southern African nation in 2002 after it had defaulted on its obligations.

Cooperation between the two parties only resumed in November 2013 after an arrangement to reschedule the arrears.

Chinamasa said Zimbabwe had paid up part of its debt, leaving arrears in the region of $22 million. – The Source