Zuma’s critics within the ANC are vocal but will they... 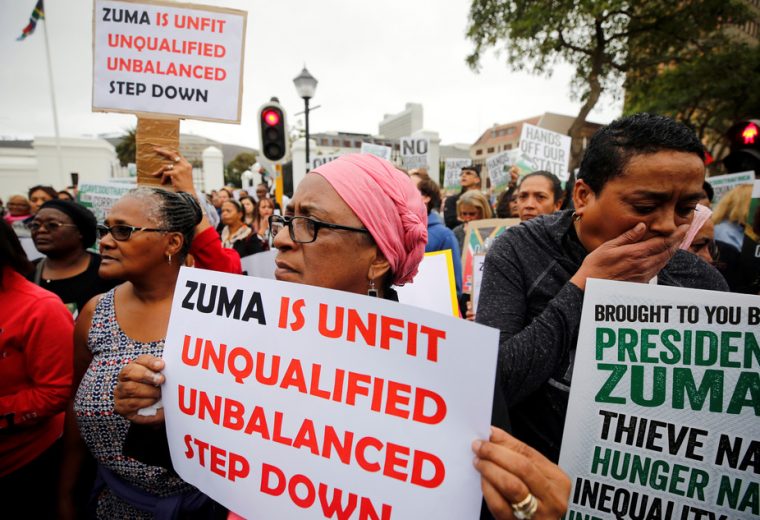 There is a lot of brave talk about standing up to President Jacob Zuma after the dismissal of Finance Minister Pravin Gordhan amid a wider cabinet reshuffle which has been widely condemned as disastrous for South Africa.

Predictions that the country has reached “a turning point”, is facing a ratings downgrade and plummeting investment, rising debt and negative growth vie with warnings that South Africa is headed towards becoming a “failed state”.

Meanwhile, calls are being made to all South Africans to voice their displeasure, threats to occupy the National Treasury, and the certainty of numerous protest marches around the country.

Yet the real action will take place in parliament. And South Africans can take it for granted that Zuma reckons that he can ride out the storm, survive the rest of his term, and secure the election of a like-minded crony to replace him.

So what danger is Zuma facing in parliament?

There are two options for challenging Zuma in parliament. The first, proposed by the main opposition party, the Democratic Alliance (DA), is a vote of no confidence in Zuma; the second, favoured by the smaller Economic Freedom Fighters (EFF), is impeachment.

To consider the prospects for these, it is necessary to turn to the constitution.

The opposition’s best option is to seek a motion of no confidence in the President (rather than in the cabinet, the other option provided for by the constitution). The relevant paragraph in the constitution reads as follows:

“If the National Assembly, by a vote supported by the majority of its members, passes a motion of no-confidence in the President, the President and the other members of the Cabinet and any Deputy Ministers must resign. “

Were this motion to pass (and a strict reading of that paragraph implies a majority of all MPs, not simply of those voting), South Africa would be in uncharted territory. There might be various outcomes. One might be that the ANC, as the majority party, would present another candidate to Parliament for election as President for the rest of the electoral term ending in 2019.

Or would it lead to an early general election? Or third, would passage of such a motion impose an absolute bar on Zuma returning to the presidency were he to hang on to the leadership of the ANC, twist arms, and return in triumph to Parliament to win reelection?