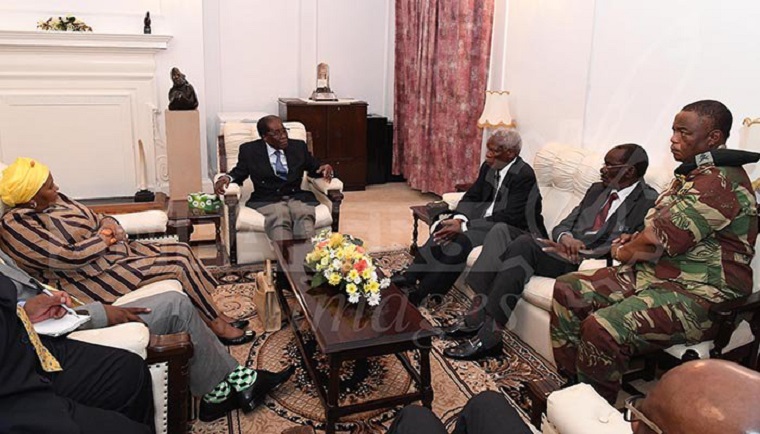 Along with the early morning mist, a mood of quiet elation enveloped Harare as news spread that President Mugabe was under house arrest

During the night of 14-15 November Zimbabwe Defence Forces soldiers were posted to strategic points in the capital, such as the police headquarters, the Central Intelligence Organisation, the Zimbabwe Broadcasting Corporation and The Herald newspaper.

The lead authors of the military action – sacked Vice-President Emmerson Mnangagwa and General Constantino Chiwenga – had prepared the ground for the operation and troops encountered little resistance at the barracks of the Presidential Guard and its commander Brigadier-General Anselem Sanyatwe.

Neutralising them was the first part of the military action, we understand.

Although the action was triggered by the sacking of Mnangagwa on 6 November, it had been planned several weeks earlier, with senior officers consulting South African and Chinese officials.

Within Zimbabwe, security was tighter still amid concerns that the CIO had been monitoring the movements of Chiwenga and other top officers.

In South Africa, Mnangagwa, Chiwenga and Chris Mutsvangwa, the 'war veterans' leader and former ambassador to China, talked to local security officials about the implications of their military action in Harare.

We understand they were given assurances of non-intervention by South Africa so long as the action didn't spill over the borders and remained 'broadly constitutional'.

Chiwenga and Mnangagwa promised to find a way to avoid the action being stigmatised as a military coup by the African Union or the Southern African Development Community.

For that reason, Zimbabwe's top officers kept emphasising that it was 'not a military takeover' and that it was not aimed at President Robert Mugabe, 'only targeting criminals around him', despite all the evidence to the contrary, including reports of arrangements for Mugabe to leave the country.

As Chiwenga and Mnangagwa try to consolidate power, they may seek to use the forthcoming congress of the ruling party Zimbabwe African National Union-Patriotic Front next month to win an imprimatur for the transition, and Mnangagwa's role as leader.

The action could hardly have come at a worse time for the opposition, which is fractious and on the back foot.

There are signs that veteran Movement for Democratic Change leader Morgan Tsvangirai has been offered a role in a transitional government along with Joice Mujuru, who was sacked as Vice-President three years ago.

Such a move could buy the new order some time and perhaps trigger an inflow of new money into the sinking economy.

Most Zimbabweans were treating the military action as an internal ZANU-PF affair.

Opposition activists were struggling to produce a coherent response to the military takeover: alternately glad to see the demise of the Mugabe regime, but with grave concerns about the chances of a democratic transition.

Military movements in the capital were disciplined and professional, as if the soldiers were acting according to a rehearsed plan.- Africa Confidential