Zimbabweans wake up to a disturbing new reality – Chipanga... 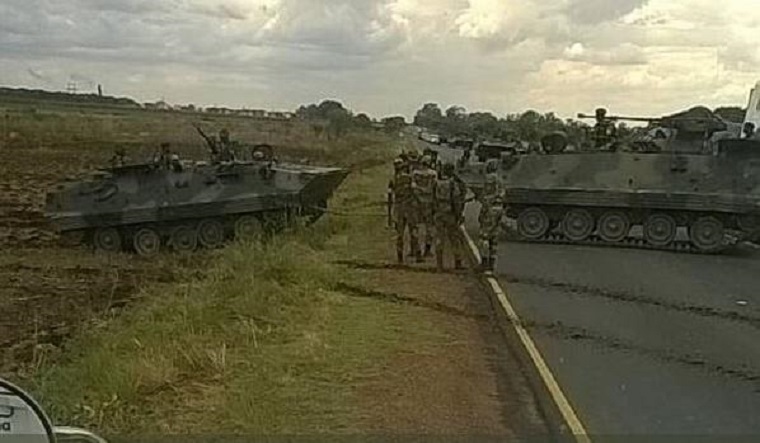 Zimbabweans awoke this morning to flurries of confused reports, leading some to ask, “Did I go to sleep and miss the revolution?”

Tanks and armoured vehicles were seen last night by our reporters and on social media, as they started to converge on the capital.

At least three explosions were heard in the early hours.

Today, reporters saw tanks blocking key roads in the capital, including the roads to parliament and the president’s office. The streets are quiet, with little traffic.

Most businesses, including the stock exchange and banks are operating, although services are restricted with areas of the capital cordoned off.

“I think the situation is calm enough for us to operate. So far there has been nothing untoward but we will, of course play it by the war,” an advertising manager with a city firm said.

Speaking on state television, which is now under the control of the army, Major General Sibusiso Moyo said that 93-year-old President Robert Mugabe was “safe and sound”, but denied this was a coup.

“We are only targeting criminals around him who are committing crimes that are causing social and economic suffering in the country, in order to bring them to justice,” said Moyo, who was wearing combat fatigues during the broadcast on ZBC.

After decades in power, the whereabouts of Mugabe are currently unknown, despite assurances from the army that he is safe. Ruling party ZANU-PF denied reports of a coup on its Twitter feed, saying that former vice president Emmerson Mnangagwa was now in charge.

“There has been a decision to intervene because our constitution had been undermined, in the interim Comrade E Mnangagwa will be president of ZANU-PF as per the constitution of our revolutionary organisation.”