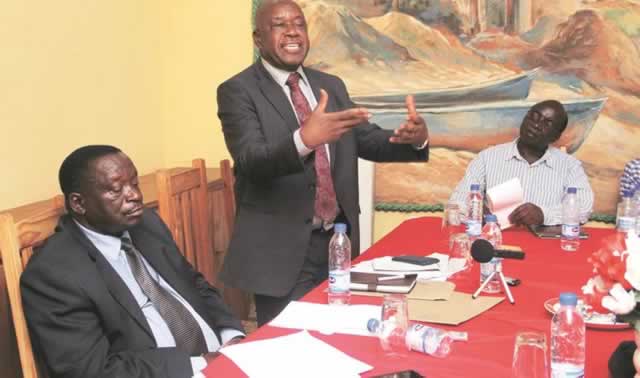 Zimbabwe’s war veterans have said that they are fed up with double standards in the Zimbabwe African National Union-Patriotic Front,  so national political commissar Saviour Kasukuwere must go because there is nothing special about him.

War veterans leader Christopher Mutsvangwa who was expelled from the party last year said people had expressed a vote of no confidence in Kasukuwere so there would be no going back.

Nine out of 10 of the country’s ZANU-PF political provinces voted for Kasukuwere to go but First Lady Grace Mugabe told a rally in Chinhoyi that he had no case to answer.

This was despite the fact that his case was referred to the party presidium after an investigation by a team led by Speaker of Parliament Jacob Mudenda. The presidium has not yet pronounced its verdict.

Mutsvangwa told a press conference yesterday:  “The idea that there can be a vote of no confidence and somebody goes and appeals to the First Lady to restore Tawengwa, that is nonsense.

“It is over now. We were done with vote of confidence. I was a Politburo member, what makes Kasukuwere different from me? I was removed from the party,” he was quoted by The Herald, which itself was attacked by the First Lady for its bias.

“They even went to my constituency and my constituency gave them bitterness in Norton and the party lost. What is special in Kasukuwere which the President says we must do with procedures?

“Procedures apply to everybody starting with Mutsvangwa, Matemadanda . . . all chairpersons who they removed. That is where procedures start from.”

Matemadanda told the First Lady to control her wayward children first before she could think of disciplining senior party and government officials and reprimanding them in public.

Mutsvangwa said war veterans were fed up with the double standards in ZANU-PF and vowed:  “It won’t happen again. We are drawing the line in the sand. We will not tolerate any putschist tendencies coming from G40”.