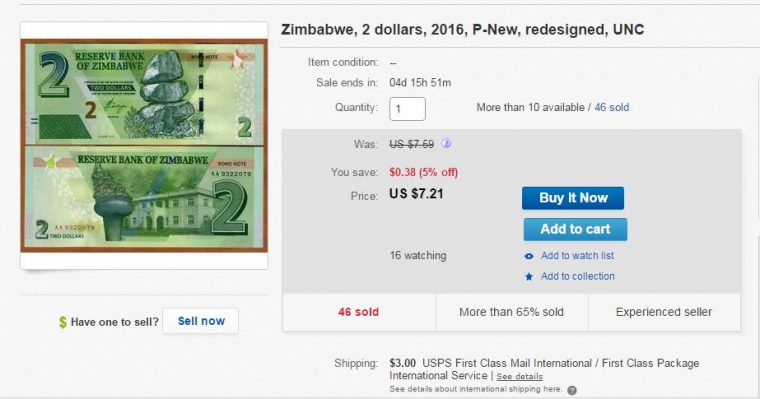 Hang your heads in shame, all you haters that have mocked Zimbabwe’s bond note and doubted its value.

Not only has the bond note maintained its value, against all expectations, it is now more valuable than the US dollar.

Well, at least on eBay, the online auction site.

The $5 bond note, which was released on February 2 this year, fetches $17.59, over three times its nominal value.

Hit by massive cash shortages, the Reserve Bank of Zimbabwe (RBZ) introduced the bond note in 2016, and pegged it at par with the US dollar on the back of a $250 million fund from the African Export Import Bank. RBZ has to date issued $94 million worth of bond notes onto the market.

The RBZ calls the bond note an export incentive, a deliberate twist of PR meant to ease the note’s acceptance in an economy still traumatised by memories of the Zimbabwe dollar.

The Zimbabwe dollar itself, put out of circulation in 2009 and officially decommissioned in 2014, is now a collector’s item.

Zimbabwe dollar notes are sold on the streets to tourists and banknote collectors.

The $100 trillion note, the highest of the notes issued in 2008 as inflation peaked at over 500 million percent, is a much prized collector’s item and fetches up to $400 a piece on eBay and as much as $100 on Zimbabwean streets.

The bond note is only legal tender inside Zimbabwe, but it is being sold on eBay by punters from anywhere from Ukraine to Ireland.