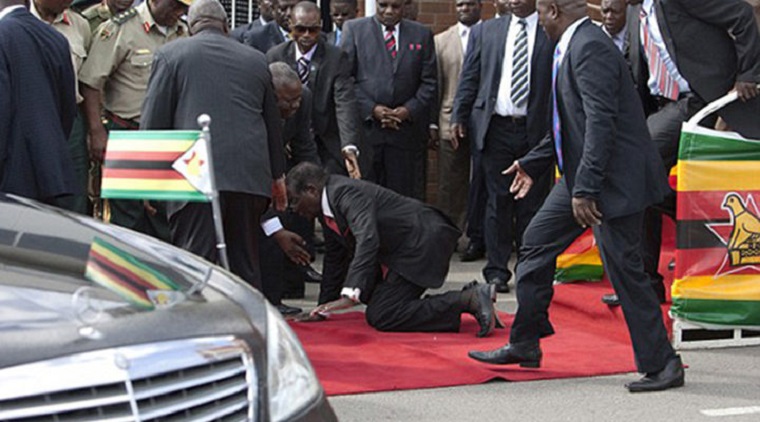 Zimbabwe’s military says President Robert Mugabe’s future will be settled today when the ruling ZANU-PF’s central committee meets after tens of thousands took to the street yesterday to call for his resignation.

Zimbabweans marched towards Mugabe’s private and official residences in the capital yesterday but were held back by the army from entering both premises as the country prepared to kick out the only leader it has known in 37 years of independence.

“We are proud of what you have done today, marching in solidarity as we fix our country. The elders have said we’ve heard and we’ve seen how committed you are to change, we thank you for that. The issue will be finalised tomorrow at ZANU-PF headquarters when the central committee meets,” army spokesperson, Major General Sibusiso Moyo told the crowd gathered outside the State House.

“The journey will not end in a day,” he added.

Reuters reported that ZANU-PF will reinstate the vice-president Emmerson Mnangagwa, who was dismissed by Mugabe last week.

The reinstatement would allow Mnangagwa to lead the party and government if Mugabe is sacked.

Mugabe’s nephew, Patrick Zhuwao said from South Africa that Mugabe and his wife, Grace, were ‘ready to die for what is correct’ and had no intention of stepping down.

The capital came alive as thousands of people flooded, dancing while many posed for photos with members of the military who were placed at key sites across the city.

The world’s oldest ruler at 93 years is clinging to power by the skin of his teeth and appears to have no support in the region, with Botswana President Ian Khama saying on Friday that Mugabe should end his attempts to remain in office.

He has also seen support from his party structures crumbling with several key allies detained by the military.

The pervasive police presence has disappeared from the streets while the whereabouts of its commissioner, Augustine Chihuri are not known.