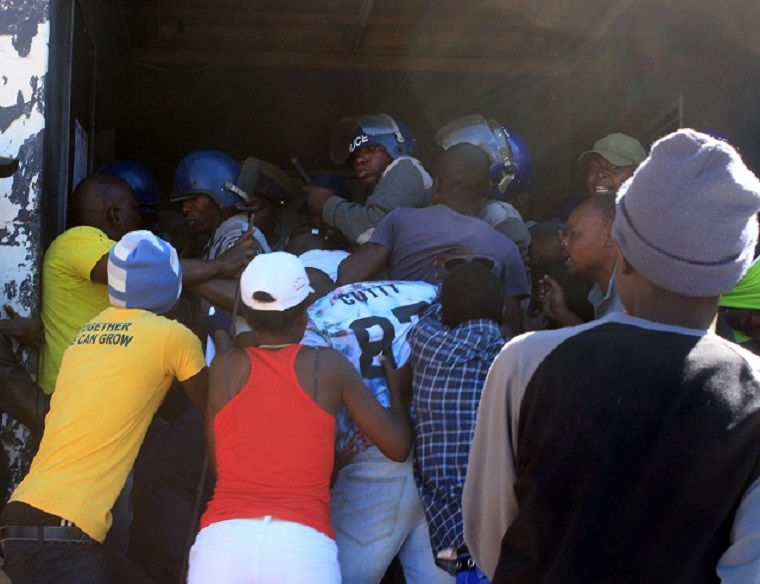 According to The Chronicle provincial youth league chairperson Anna Mokgohloa was assaulted by war veterans, while Bulawayo Central District chairperson Magura Charumbira was stabbed in the head and face.

Riot-police had to be called to control the factions and things only calmed down after the rowdy youths were addressed by local police chief Mthokozisi Manzini-Moyo.

The State-controlled daily said youths and war veterans laid an almost six-hour siege at the hall while central committee members, politburo members, provincial executives and legislators were holed up inside.

The youths accused the provincial leadership of supporting Kasukuwere who reports said was rejected by the country’s 10 party provinces, which ironically include Bulawayo.

The youths, who were chanting slogans, throwing stones into the hall and smashing windows, said they wanted to stop the meeting as they did not recognise the provincial executive.

The report said some youths threw pepper spray into the hall, choking provincial executive members inside.

Provincial chairman Dennis Ndlovu said the youths claimed they did not recognise him and his executive.

“We’ve cancelled a number of meetings following disruptions, threats and violence at Davies Hall by some of our youths. We even cancelled a meeting yesterday because of their threats. Today we decided not to abandon the meeting because we need to move forward as a party and were expecting Vice President Phelekezela Mphoko,” Ndlovu was quoted as saying.

“We decided to call the police and continue with the meeting. My position is that I didn’t receive any formal communication regarding Cde Kasukuwere. I therefore can’t take any position or make any decision as the provincial chairman.”