WHO rethinking Mugabe’s appointment after outcry! 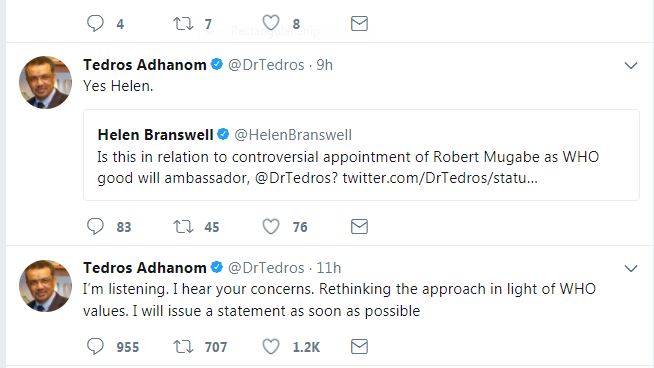 The World Health Organisation is rethinking President Robert Mugabe’s appointment as its goodwill ambassador after an outcry from mostly Western countries, human rights organisations and opposition leaders in Zimbabwe but this could split the United Nations organisation.

WHO director Tedros Adhanom Ghebreyesus, the first African to hold that post, said Mugabe was appointed goodwill ambassador at the non-communicable diseases conference in Uruguay last week so that he could use his role to influence his peers in the region because Zimbabwe placed universal health coverage and health promotion at the centre of its policies to provide healthcare to all.

There was, however, an outcry over the appointment from Britain, the United States, Human Rights Watch, UN Watch and Zimbabwe opposition parties which said Mugabe could not be appointed to that ceremonial post because of his poor human rights record.

Hillel Neuer of UN Watch, a human rights group, said: "The government of Robert Mugabe has brutalised human rights activists, crushed democracy dissidents and turned the breadbasket of Africa — and its health system — into a basket case. The notion that the UN should now spin this country as a great supporter of health is, frankly, sickening."

He tweeted: “I urge you to cancel your appointment of Mugabe as WHO 'goodwill ambassador' he ruined Zimbabwe's health."

Tedros tweeted: "I'm listening. I hear your concerns. Rethinking the approach in light of WHO values. I will issue a statement as soon as possible."

Asked by Helen Branswell: “Is this in relation to the controversial appointment of Robert Mugabe as WHO good will ambassador?” ,Tedros replied: “Yes Helen”.

Ofelia Cazacu tweeted back: “Everyone should be a player”.