Mugabe gone but was it a coup or not? 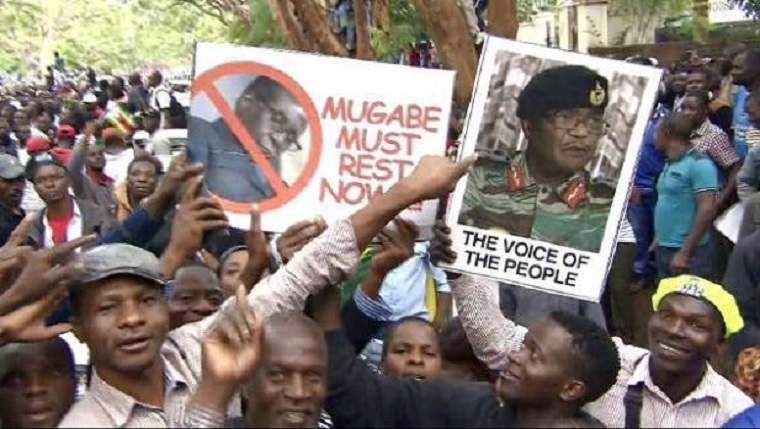 It was the most remarkably eventful week in Zimbabwean politics since independence in 1980. It started with the military seizing control on Tuesday night, 14 November, and ended on Tuesday night, 21 November, with Robert Mugabe resigning after 37 years as president.

And yet it unfolded almost in slow motion. The army could easily have stormed into Mugabe’s residence and dragged him off to jail – or worse, installed itself in power on Day One.

Instead the army (or probably axed vice president Emmerson Mnangagwa, pulling its strings from the wings) stage-managed an elaborate fiction. Operation Restore Legacy was not in fact a coup but just an intervention to retrieve Mugabe’s and Zanu-PF’s legacies from the ‘counter-revolutionaries’ who threatened to besmirch both – in other words from the Generation 40 (G40) faction in Zanu-PF, headed by Mugabe’s wife Grace, and bitterly opposed to Mnangagwa.

Maintaining that illusion – when armoured vehicles guarded street corners in Harare, Mugabe was effectively under house arrest and many G40 cabinet ministers had been arrested or had fled – was no mean feat.

But Zimbabwe Defence Forces chief Constantino Chiwenga was helped in this conjuring trick, astonishingly, by none other than Mugabe himself. When the envoys of the Southern African Development Community (SADC) met him and Chiwenga in Mugabe’s official residence last week – just a few hours after the army had to all intents and purposes toppled him from power – Mugabe could have screamed “Help!”

But he didn’t, according to South Africa’s Defence Minister Nosiviwe Mapisa-Nqakula. South African President Jacob Zuma, in his capacity as SADC chairperson, had sent her and State Security Minister Bongani Bongo to Harare as SADC envoys to assess the “coup” and perhaps to mediate.

Mapisa-Nqakula told Radio 702 that she and Bongo tried to figure out what was going on. “Well, according to Mugabe, nothing; he’s happy,” she said. “And of course as we are able to see, he was able to drive from his house to the State House. And there are no challenges in Zimbabwe. And if there are any challenges, he expects the people of Zimbabwe would raise those challenges with him, so he can find a solution.”