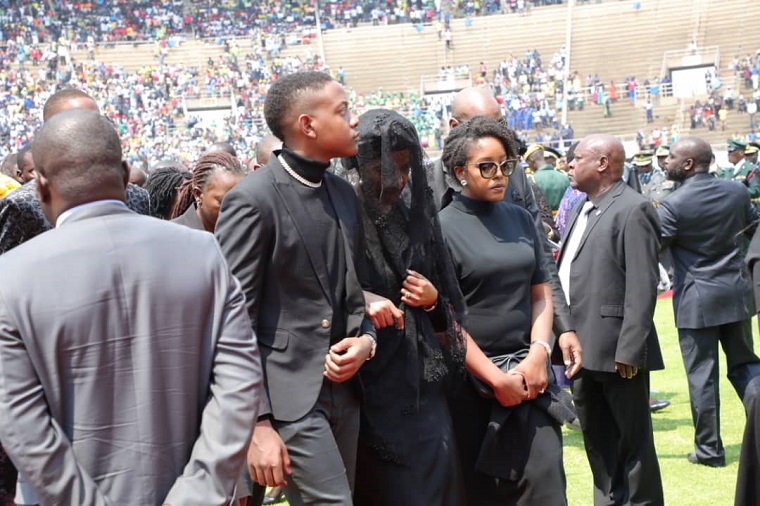 A nephew of former Zimbabwe President Robert Mugabe has told mourners at his uncle’s memorial service in Harare that the former strongman was a “sad, sad, sad man” in the last days of his life.

“I spent lots of time with him towards the end of his life. He was a sad man, a sad, sad, sad man. He recalled quietly the journey he had walked, a profound journey, a hard and excruciating journey, and thus must he leave,” said Walter Chidhakwa, hugging himself, with tears in his eyes.

He made the address at Harare’s partially full National Sports Stadium today before scores of heads of state and other dignitaries.

Mugabe died in a Singapore hospital on Friday last week, where he had been receiving treatment. He was 95 years old.

Chidhakwa said that when Mugabe’s remains arrived in Zimbabwe, the crowds that gathered to welcome him were “of unprecedented proportions”.

“The kinds of crowds that have never before been seen in this country. I called it a genuine overflow of kindness.”

When current Zimbabwe President Emmerson Mnangagwa announced the names of heads of state who would attend Mugabe’s memorial, it was clear that he was revered and loved, said Chidhakwa.

“As a member of the family I was also for some time in government. Our father had very strong family views,” said Chidhakwa.

Following the liberation struggle, Mugabe set out to unify his own family and families in Zimbabwe, asking clans to empathise and sympathise with one another, he said.

“This is one of the greatest lessons we must give to our children.

“The language of unity and togetherness was his language. He detested tribalism, he wanted a nation that was united. He also recalled that the struggle had been won because of the uniting of the masses of Zimbabweans.

“I hope, I have confidence, that as we remember him, as we go through his memory, we recall his voice calling us to unity, bringing us together as a nation.”

Chidhakwa said Mugabe was “particular” about honesty and integrity and taught his children to be what they were, “not pretend to be what we are not”.

“Our father was about consistency, being consistent and carrying it to its final conclusion.”

He said that while some might have not felt Mugabe’s controversial land reform programme undertaken in the early 2000s “was the right way to go”, it had to be “completed” and carried out to its “logical conclusion” because it had haunted the country since the liberation era.

“He loved his people and wanted them to have land and resources so they could look after themselves. The burden of looking after his people told him that it was better for some sections of society to be angry while the majority benefited from the land reform programme. He wanted his people to be part of economic development.

“So we miss him already, we want to be with him. The mind knows that at 95, at some point we must go, but the heart wanted him to stay a little longer.”

Mugabe’s body will be preserved until a private burial at the National Heroes Acre once a new mausoleum has been constructed.- ANA