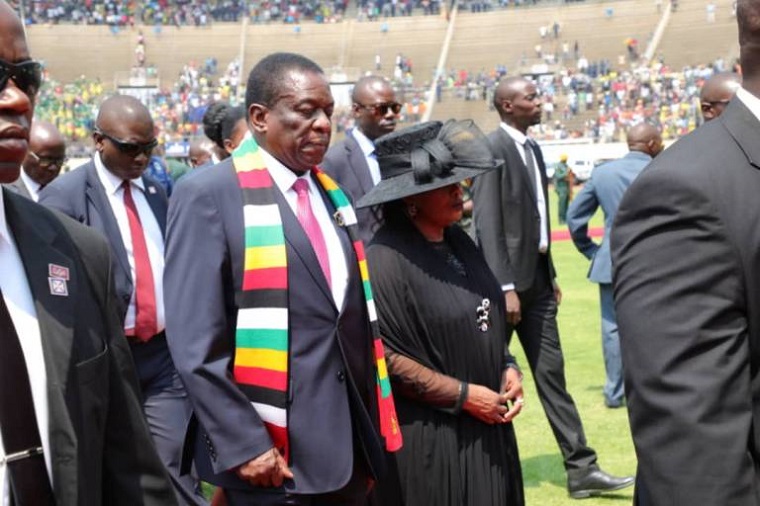 Zimbabwe President Emmerson Mnangagwa used the memorial service of his predecessor Robert Mugabe today to call for the lifting of “sanctions” in his cash-strapped country.

“Zimbabwe should be free of the albatross of sanctions… may the world honour Zimbabwe by ensuring sanctions are immediately removed. Give us a new start, remove them now, we do not deserve them,” Mnangagwa said.

He said Mugabe had challenged “global powers” and was repaid through “spiteful sanctions”.

He was speaking at the National Sports Stadium in Harare, where he was joined by several African heads of state and other dignitaries who had earlier paid tribute to the 95-year-old Mugabe, who died on Friday last week in a Singapore hospital.

Mnangagwa started his speech by sending condolences to Mugabe’s family, his wife Grace in particular, saying she would continue to have his support and that of his administration “in these moments of grief”.

He said a “dark cloud enveloped Zimbabwe” when Mugabe died, as the country had lost a revolutionary icon and founding father.

“A giant tree of Africa has fallen. The bold and steadfast revolutionary is no more. Taken away from the people he fought hard to free, taken away from a continent into which he was born and loved.”

Mugabe sought to carry a torch of sacrifice, unity, and freedom, and it was thanks to his brand of Pan Africanists and freedom fighters that “the once shackled Africa is finally free”.

“Today Zimbabwe is mourning the demise of a great son of the soil, a visionary and champion of our empowerment. Southern Africa mourns the loss of a front liner. Africa weeps, grieving the loss of a true Pan African. Our continent is in sorrow and our region in grief. Above all a family is stricken and in deep sorrow.”

Mnangagwa said Mugabe was a great scholar, a thinker, a teacher and a true African.

“He taught a generation, led a nation and inspired a continent. He spoke for the oppressed, was for years our commander, mentor and leader in the party and government.”

He said Zimbabweans were humbled by the number of leaders and others who had attended the memorial, and that their presence refuted the “retrogressive narrative” about the former President.

It was incumbent on Zimbabweans to continue the rich heritage that Mugabe had bequeathed, said Mnangagwa.

“As we mourn, we remember his tenacious, fearless adherence to principles, which shouldn’t be sacrificed on the altar of expediency.”

Mnangagwa said his administration would continue to entrench democratic tenets, and emphasised that Zimbabwe’s land reform programme would “never, never, never be reversed”.

“For [Mugabe] this was the grievance of all grievances. The land and people are now reunited. Today, over 665 000 families have benefited from the land reform programme which he led from the front.

“Land reform will never, never, never be reversed. We are unshakable on this matter. Now we must be productive and modernise,” he said.

Mugabe’s body will be preserved until a private burial at the National Heroes Acre once a new mausoleum has been constructed.