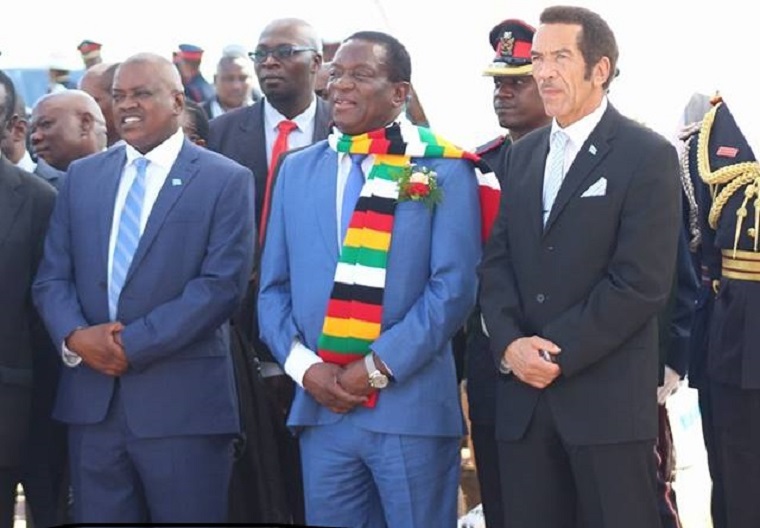 Zimbabwe and Botswana have pledged to reconstruct relations between the two countries, according to the Zimbabwe Broadcasting Corporation.

The commitments were made by the leaders of the two countries President Emmerson Mnangagwa and President Ian Khama when they held bilateral talks at the Office of the Presidency in Gaborone today.

Mnangagwa said Zimbabwe is serious about reviving political and economic relations for the benefit of the two countries.

“It was imperative that Zimbabwe and Botswana get back on the right track before President Khama leaves office on the 31st of March,” Mnangagwa said.

He acknowledged that Khama was among the first three leaders who sent their congratulatory messages within the first hour of his coming into office, which was an ample demonstration that the two countries could successfully mend their relations.

He attributed the big entourage to the critical areas of cooperation that the two countries will be working to consolidate during the two-day state visit.

Relations between Harare and Gaborone have not always been cozy with Khama being labeled as Mugabe’s fiercest critic in the region.

Mnangagwa told his counterpart that he called on Mugabe on Thursday last week and indicated to him that he will be paying a visit to Botswana, and Mugabe wished him well showing that past misunderstandings are now a thing of the past.

In his welcome remarks, Khama told Mnangagwa that it is an honour for him and his country to be the first port of call by Mnangagwa on his maiden state visit.

He thanked Mnangagwa for accepting his invitation which demonstrates that the two leaders have resolved to revive bilateral cooperation.

“Developments in Zimbabwe have given Botswana an opportunity to deepen cooperation,” Khama said.

He told Mnangagwa that he was very keen for him to visit Botswana before he steps down end of March and that he introduces him to his successor, Mokgweetsi Masisi who is the current Vice President of Botswana.

Masisi was also in attendance.

The two leaders were flanked by their ministers who are leading portfolios that the two countries are seeking to revive bilateral cooperation.