It’s a lie- Zimbabwe was not evicted from its embassy... 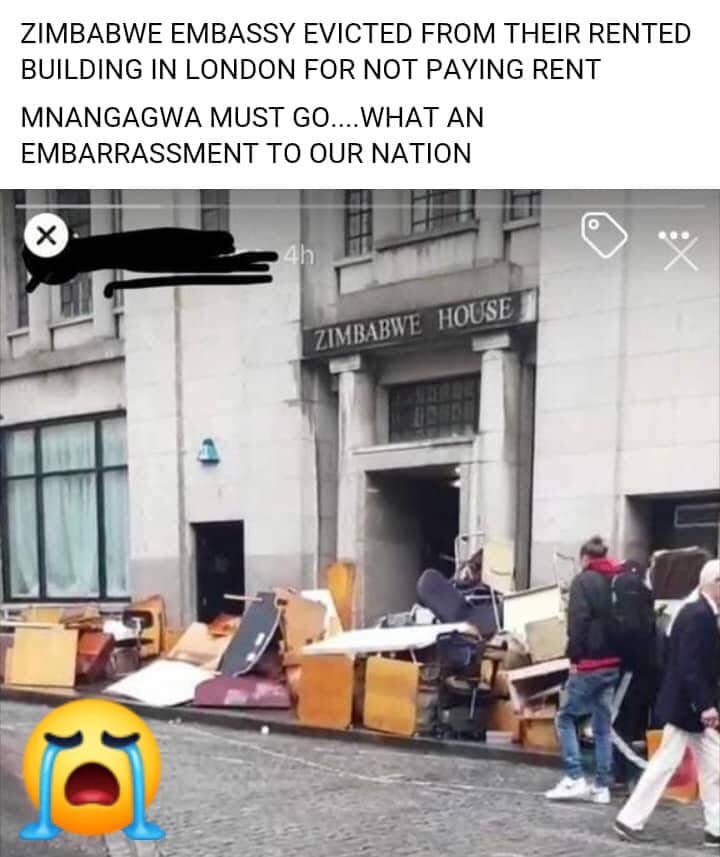 Zimbabwe was not evicted from its embassy in London which is at Zimbabwe House because it owns the building from way back in 1965, the year the then Rhodesia declared unilateral independence from the United Kingdom.

A picture showing furniture outside the embassy was widely shared on 26 September with claims that Zimbabwe had been kicked out of the offices because it had failed to pay rent.

“This is false; Zimbabwe’s government owns the building and therefore cannot be evicted. Officials confirmed that the embassy had thrown out office furniture as part of a general cleaning exercise, the fact-checking arm of French news agency Agence France Presse reported today.

“Zimbabwe Embassy evicted from their rented building in London for not paying rent. Mnangagwa must go…. What an embarrassment to our nation,” read the text accompanying the image.

Despite assurances that the embassy was operating normally and the building could not be sold, the picture provided a field day for critics of Zimbabwe and South Africa.

Hilda Venter said: “Remember the time the farmers were evacuated from their land????”

Colin Crossman said it was fake news. “This is fake news. Don’t you fact check your posts? It’s diplomatic premises protected by law, bailiffs wouldn’t be allowed in. I live in London. This would be front page news if it happened.”

Jennie Quinn challenged him: “How do you know if this is fake news? I need to check your claim against the facts, please provide me with a link where it is stated that it is false or fake. Thank you.”

Mike Wood said: “That’s what you get when citizens continue to vote in the corrupt clowns.  A trait of Africa and Africanism. A failed continent under African leaders.”

Jaco Stears chipped in: “Say whatever you want. They still have the land.”

Jean Vosloo responded: “S.A. WILL BE THE NEXT”

Rodney Coetzer said: “Zimbabwe is not a nation, it is just a group of losers together.”

Jason Schuler responded: “At least they have the land.”

Yolanda Nooneinparticular quipped: “Nice taste of Africa hey London. Thats how they roll. You should come to SA and experience real fear factor living. They have been in control of all govt institutions since ’94 and have turned it into a shit show. Nothing works. Every single one is broke beyond saving and all the leaders are corrupt or on trile for some kind of kind. Viva anc!!!!!! Mmmmmmm come to think of it, much the same pattern as Zim some time ago. Imagine history being allowed to repeat itself in SA and the world does fuckall… AGAIN!!!! I hope the slain minorties haunt the shit out of everyone who stood by with folded arms.”

According to AFP fact-check, Zimbabwe House is also a Grade II* listed building on the National Heritage List for England – that grading means it’s an important building of more than special interest.