Investors scramble to get money out of Zimbabwe at any... 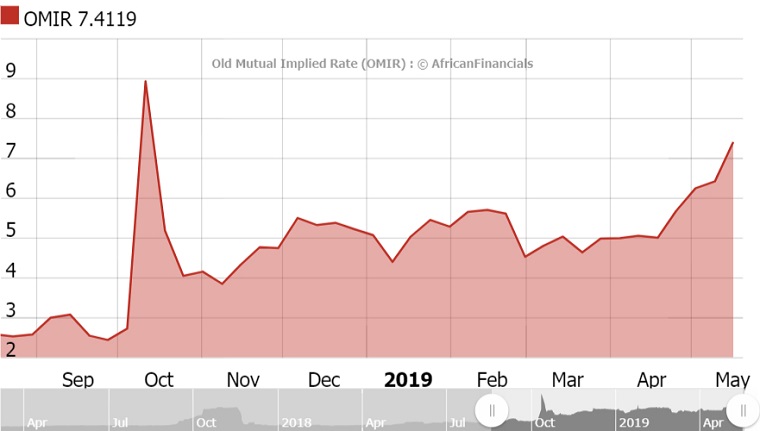 Investors, scrambling to get money out of Zimbabwe at any cost, are pushing the Old Mutual Implied Rate (OMIR) to levels only reached in October last year when the market panicked at the introduction of new fiscal and monetary policies which saw the re-introduction of foreign currency accounts and  a 2 percent tax on all electronic transactions.

The OMIR, which is the difference between the share price of Old Mutual in Harare and that in London, is one of the unofficial exchange rates used by business to trade on the black market.

The OMIR peaked at 8.9338 on 8 October a week after Finance Minister Mthuli Ncube and Reserve Bank of Zimbabwe governor John Mangudya announced new fiscal and monetary policies that sent the market haywire.

The market, however, came back to its senses with the rate appreciating to 3.8526 on 5 November before falling again to 5.5062 on 3 December.

The fall coincided with the announcement of results by companies whose financial years end in December and March.

A market analyst said the fall in the OMIR was “driven by investors who want to move money out of the country at any cost”.

“It bears little relationship to local fundamentals but is important in that it reflects investor/business confidence in the future. It also indicates the difficulty of externalising essential revenues,” the analyst said.

The analyst said the decline suggested little or no confidence in the liberalisation process under way and the operations of the interbank rate.

Business has accused the central bank of interfering with the interbank rate which stood at 3.45 on Friday, less than half the RTGS rate on the black market.

The central bank has announced that it will release US$500 million on the interbank market tomorrow.

Most people will be watching at which rate it will trade.

Business has complained that it is being forced to hike prices because it cannot get money on the inter-bank market and has to resort to the black market.

Finance Minister Mthuli Ncube told Parliament on Wednesday that the country has US$800 million in nostro accounts.