Grace blasts Mujuru but says she is welcome to rejoin... 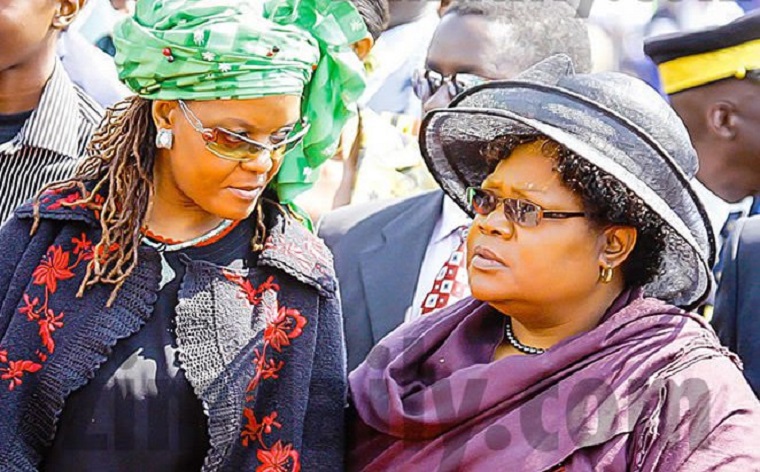 First Lady Grace Mugabe yesterday blasted Zimbabwe People First leader Joice Mujuru accusing her of being incompetent, corrupt and sleeping around with men in her party  but she said the former Vice- President was welcome to rejoin the Zimbabwe African National Union-Patriotic Front if she asked for forgiveness.

Describing Mujuru as Queen Bee,  Grace said  the former Vice-President has now realised that it is cold outside ZANU-PF and must just humble herself and ask for forgiveness so that she can rejoin the party and be buried like a hero when she dies.

Mujuru has been under a lot of pressure this week following squabbles within her party which were sparked by her sacking of her top lieutenants who in turn expelled her from the party.

Mujuru accused her lieutenants of trying to turn her into a sex slave describing her as a Queen Bee who everyone wanted to sleep with but Rugare Gumbo said this was exactly the problem with Mujuru, she did not understand simple things.

“We indeed said she was supposed to be the queen bee. Not that we wanted to sleep with her, but we were supposed to do all the dirty work, fight for her, protect her and not expose her because we understood her limitations,” he told Newsday.

“We knew if she was exposed, she would make mistakes like she has been making after being exposed. Now, how can you have a leader, who does not understand such simple things?”

Grace Mugabe told a rally at Buhera yesterday that Mujuru was free to return to ZANU-PF and her husband would welcome her.

“VaMugabe munhu waMwari,” she said.  He was going to forgive her because he had unparalleled leadership qualities.

She said if God forgave those who killed Jesus and murderers in Zimbabwe are forgiven, what would stop him from forgiving Mujuru?

She told political commissar Saviour Kasukuwere to go and rescue “his sister” before she did something terrible.

Kasukuwere said in December Mujuru and those who were expelled from ZANU-PF in 2014 were welcome to rejoin the party.

Members of Mujuru’s party said two years ago that the expulsion of Mujuru from ZANU-PF was a welcome release from an abusive relationship.