Chamisa under fire for announcing two coronavirus cases in Harare 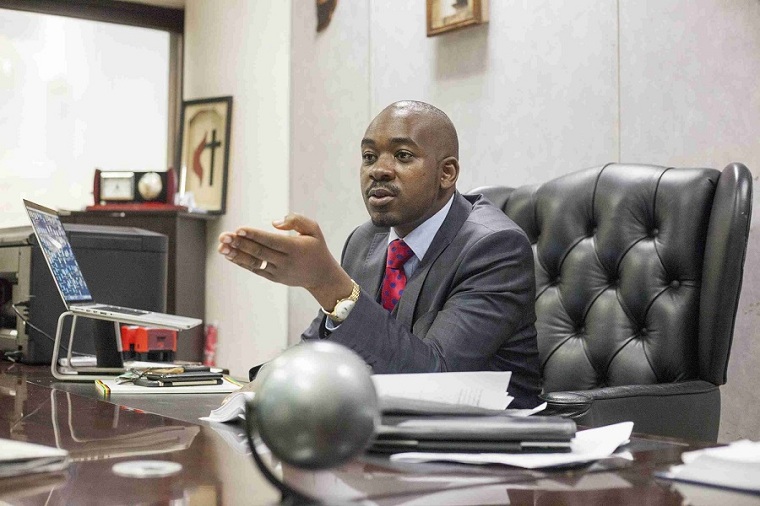 Movement for Democratic Change leader Nelson Chamisa came under fire today after he tweeted that two new cases of coronavirus had been confirmed in Harare.

Several twitterers accused the opposition leader of cheap politicking arguing that there announcements must be made by one centre, the Ministry of Health.

Zimbabwe has so far only confirmed one case, that of a 38-year-old white Zimbabwean in Victoria Falls.

The man had travelled to Manchester in the United Kingdom and returned to his home in Victoria Falls.

Chamisa this morning tweeted: “I have just been informed by City authorities that we have two new COVID-19 cases confirmed in Harare this morning. Plse take preventive measures and exercise extreme caution wherever you are. We must together ACT to stop the virus frm spreading. Remember to always wash your hands.”

ZANU PF PATRIOTS, responded: “We need responsible reporting, @MoHCCZim should be allowed to report with full details. Everyone else should stay away from doing.”

It was supported by Haile Tayt who wrote: “With all due respect this is the time you should just keep quiet to avoid causing unnecessary panic within the society..”

Garikai Goremusandu, however, differed asking: “Can it be independently verified President?”

Gerald Maguranyanga, however, argued that this was the time for Chamisa to show leadership.

“Nelly my brother. This the time for you to exercise leadership. Please do not unhelpfully pull rug from under feet of @MoHCCZim  by premature announcements. You may mean well but eventually induce confusion.”

MuchembereTwimbo chided: “Your prayers have been answered Chami. May this help you ascend to power.”

To which Martha Chikata added: “You’re just one hell of an annoying person; so desperate for relevance when it’s not even necessary! This is no time for politicking!”

Gibson Sithole Mhlaba asked, however: “Where is politics in announcing a confirmed case of the virus. Newewo unazvo.”

Taurai Tsungu  supported Chamisa, tweeting:  “Morning my President. Only if we had a people’s government….. unfortunately the one that imposed itself on us doesn’t care. They have been breaking the record of endangering our lives through misgovernance ever since they couped themselves into power!”

Jeff Last Mashipe tweeted: “Mr President the truth is about to come out, there is more figures hidden by the junta, they have got a don’t care attitude. President Zimbabwe Flag of Zimbabwe needs a government of the people not this ruthless, our elderly persons and pregnant women are in danger we need emergency.”

Without giving any names, Information Secretary Nick Mangwana  tweeted: “In times like this, let every community leader, every institution leader and even political leaders exercise self-restraint in making #Covid19 announcements so the Nation can be given accurate information by the @MoHCCZim.  Let’s play our appreciable role by taking these measures.”

Phoenix said even if the Harare City Council was run by the MDC, it should report to the ministry.

“Imbomirai to announce kwamusina kuswera, City authorities are not the Minster of Health. Let’s hear ONE voice as a country despite of our political differences. May your City authorities stop reporting to u & report to gvt so we can fight further spread of Covid-19 together,” Phoenix tweeted.