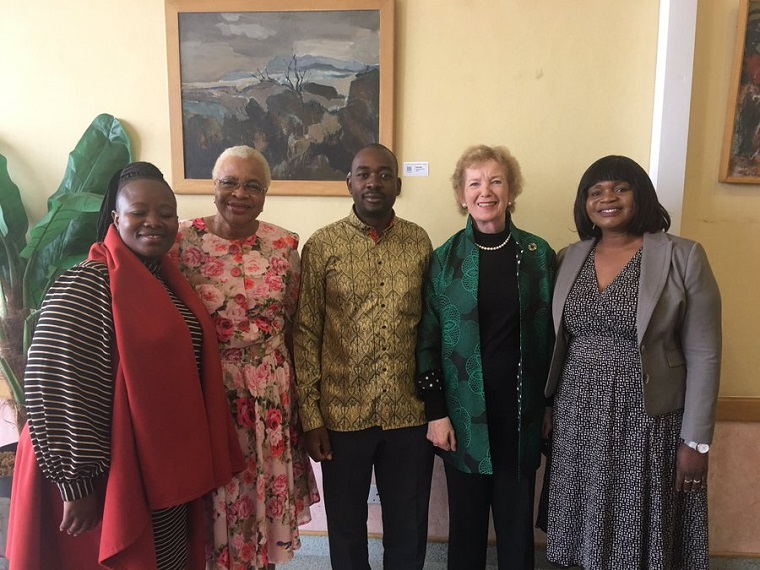 Movement for Democratic Change leader Nelson Chamisa, for the second day running, said dialogue was the only viable solution to the challenges that Zimbabwe is facing.

He said this after meeting two members of the Elders Council, Graca Machel and Mary Robinson.

“Just had a great meeting with the Elders Mama Graca Machel and Former Ireland President Mary Robinson,” he tweeted.

“Fixing politics through genuine and credible political dialogue for comprehensive political & economic reforms is the only viable solution to the challenges Zimbabwe is facing!”

The MDC leader yesterday said life is short that we should never waste it in unprofitable fights, rivalry and squabbles!

Chamisa has so far refused to join President Emmerson Mnangagwa in dialogue arguing that Mnangagwa did not win last year’s elections though he lost the election challenge in court.

While Chamisa continues to be popular because of the current economic crisis the country is facing, he could lose relevance if the Mnangagwa administration solves the current crisis, something Finance Minister Mthuli Ncube promises should be done by the end of this year.

Ncube, however, admitted that there was an 18-month lag between the implementation of economic policy and the realisation of its benefits.

The confidence Mnangagwa has shown over the past few days could be an indication that he firmly believes the country is getting out of the woods.

“So we are building and reconstructing that collapsed economy. To do so, we have to interrogate what we need to do, what resources are at our disposal to reconstruct our economy under sanctions….

“We realise that government is not in the business of doing business, so it is critically important that we have conversations with the people over there (investors), but we must create conditions in our jurisdictions where they can feel that their capital is safe. We must have the right regulatory institution,” he said.