20 years on, how the Zimdollar died 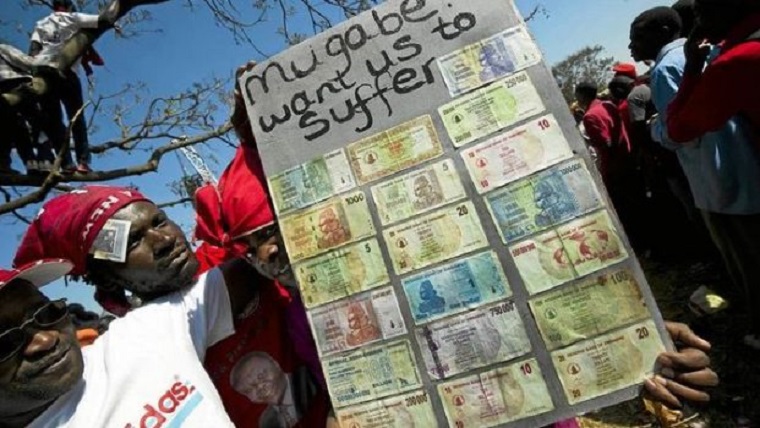 Today, November 14, 2017 marks exactly 20 years to the day the Zimbabwe dollar crashed, a fate that is afflicting its modern day replacement the bond note, at an even faster rate.

For two decades, successive Finance Ministers and central bank governors tried all sorts of trickery to save the currency; from dropping zeroes to changing its name.

Today, 20 years on, The Source traces the Zimdollar’s collapse from that fateful November day.

1997 – War veterans hold a series of protests against President Robert Mugabe, pressing for gratuities and pensions. The protests include a march on State House and heckling Mugabe during his Heroes Day speech in August.

Mugabe buckles, and orders Finance Minister Herbert Murerwa to dole out ZW$50 000 each to over 50 000 war veterans. The total bill would be ZW$4.2 billion, or over US$300 million. It is 3 percent of GDP then.

None of it is in the budget. Mugabe dismisses concerns, including from Murerwa, that the spending will bankrupt the economy. He declares: “Who ever heard of a country going bankrupt?”

Separately, the government has announced its intention to list more than 1 400 farms, many of them productive, for redistribution to landless blacks. It is reported that the IMF and other donors have threatened to pull out.

Rumours spread that foreign reserves are down to just a month’s worth of imports. Speculators, panicked by the flurry of bad news, start stocking up on US dollars. Desperate, the government injects US$15 million to try and prop up the Zimdollar. But the pressure is unrelenting.

Late on Friday, November 14, the Zimbabwe dollar plunges 72 percent. The stock market crashes 46 percent. That same day, by coincidence, there is a national blackout. The day comes to be known as “Black Friday”.

In the aftermath, the government orders companies to shut down their foreign currency accounts, hoping the flow of US dollars onto the market will put brakes on the Zimdollar’s slide. But it has the opposite effect; confidence collapses even further, as does the stock market and the Zimdollar itself.

Investors head for the exits. McDonalds, the US fast food giant, abandons plans to open its first outlet in Zimbabwe.

That December, a proposal to raise a new tax to fund the pay outs is withdrawn after labour unions hold street protests.